Universal Orlando Resort has announced their 2022 Freedom Pass, a special year-long pass for military families for one low price!

Freedom Passes are like a Universal Annual Pass, but without the other benefits Universal adds to regular annual passes (like parking and discounts).

These Passes Are Simply Amazing!

When will Universal announce the 2023 Freedom Passes?

The Universal Orlando Freedom Pass is valid for use every single day of the year between 11 November 2021 and 31 December 2022 with no blockout dates.

The 2021 Freedom Passes are no longer for sale, but if you have any remaining they may be used prior to the end of the year.

This Pass is a Park Hopper.

2022 prices for these special military passes remain the same as 2021, something Disney can’t say!!!

These Freedom Pass are only available at your Base Ticket Office or through your Travel Agent as part of a package.

They are not availableat Universal’s gates!

Those eligible my purchase and activate up to 6 Freedom Passes duting the offer period.

There seems to be a lot of confusion about these passes on Facebook when I’ve shared this info in the past. So in a effort to be absolutely clear:

These Freedom Passes are like an annual pass, without the other benefits that usually go with an AP, like free parking and discounts.

You only pay the price once for the whole year, not on every visit or every so often. 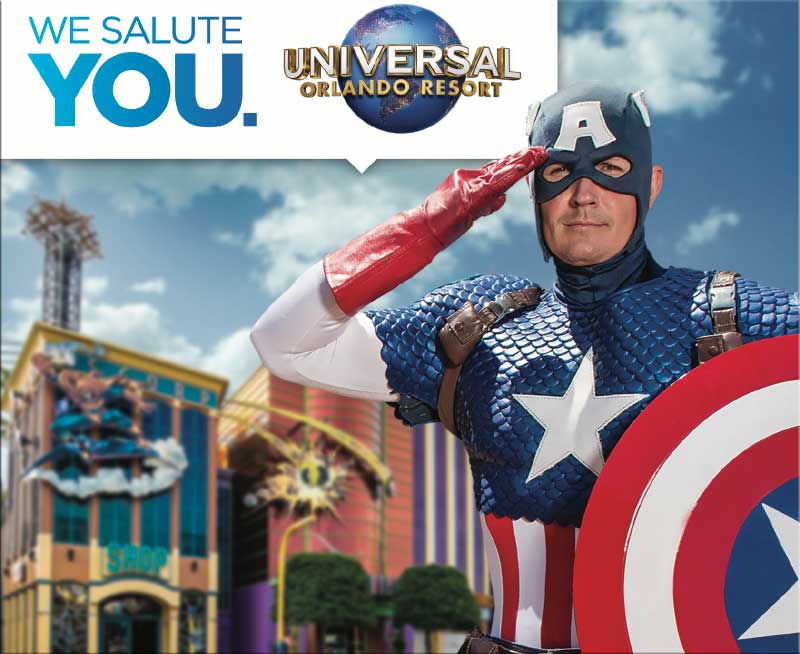 Those Eligible for This Offer Are:

Note: Unlike Disney, both the member and spouse have their own eligibility! SO that’s 12 Freedom Passes between them.

Please Note/Most Important!!! – The Freedom Pass does not include any extras, like parking or discounts on food or merch! Only regular park admission is included. Admission to Halloween Horror Nights IS NOT included. These passes are really not for those who are local or semi-local who buy regular annual passes and drive. So if you will be parking each day in Universal’s garage or use the extra AP the discounts, total up all costs each way before purchasing these passes. These are perfect for those who fly in, use the Superstar Shuttle and stay on property for one long stay or several shorter ones during a year. I did a couple trips this year and it was perfect.

The eligible person must present a valid Military ID at time of voucher purchase and when exchanging the voucher at the Universal sales window.

This topic has been controversial since the start of the Freedom Passes in 2021!

As noted above in the Official Rules which can be found online and in Universal Orlando’s press release, you are only allowed one single activation event.

This policy makes no sense, as Universal would be turning away additional income not only from the reduced price pass, but also the food and merchandise purchases the additional bodies would make. It would also place a huge burden on the military member, It’s hard enough for the military to plan our own schedules and hope they aren’t changed for us, but than add on top of that hoping those you bought tickets for will still be able to go later in the year is crazy.

Also No One at the Universal Orlando Resort who works in Tickets is aware of this rule. On my Sept 2022 research trip I queried every Ticket sales location if I could activate more Freedom Passes since I already had done an activation this year. In every case I was told yes! I mentioned the official rule and not a single ticket worker had heard of it!

Here are some of the comments that ticket workers made to me:

How to Buy Freedom Passes

Freedom Passes can only be purchased at your Base Ticket Office or as part of a Military Discounted Package through your Travel Agent.

When will Universal announce the 2023 Freedom Passes?

When you purchase tickets/passes as part of a package they are protected because if you change or cancel your reservations, the whole package is refunded.

If you purchase them on Base all sales are final!

How to Use Freedom Passes

I have a whole post dedicated to this topic, you can check it out here.

Use a Military Expert for your Universal Studios Vacation

As I noted, a package is the way to go!

Use a Military Expert for your Universal Studios Vacation!

Jen Novak is Our Recommended Universal Studios Travel Agent! Just click this link to get your Quote

The above Admission Media is non-refundable, non-transferable, and must be used by the same person on all days. Standard entry includes biometric scan. Valid only during normal operating hours. Parks, attractions, or entertainment may: close due to refurbishing, capacity, weather or special events; change operating hours; and otherwise change or be discontinued without notice and without liability to the owners of Universal Orlando Resort (‘Universal’). Unless otherwise stated, does not include admission to separately ticketed events at any of the Universal theme parks or within any of the CityWalk venues, Universal Cinemark, or Hollywood Drive-In Golf™, and parking or discounts on food or merchandise. Some CityWalk venues require ages 21 or older for admission. Valid Photo ID required. Additional restrictions may apply and benefits are subject to change without notice.