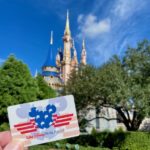 Disney World's Military "Special" Isn't so Special for 2022, While Universal Orlando's Is! Lots of military families are saying, "It's been a good Run Disney, but I'm taking my business to Universal." Increasingly Walt Disney World is being seen as trying to milk every dollar they can out of their guests, and some in the military community feel Disney's target is … END_OF_DOCUMENT_TOKEN_TO_BE_REPLACED